Just imagine what could happen when Trump visits the UK.

A short article by the South Essex Stirrer. Please see the link at the end of the article for the link to the original text.

The working visit of Trump to the UK on 13-14th July has predictably generated a lot of excitement in many sections of the left and also in a fair few sections of the anarchist movement as well. There’s already discussion and debate about what form the protests against Trump’s visit should take. Suffice to say, it looks as though there will be a variety of actions and protests to mark the occasion. It’s also a reasonable assumption that whatever takes place on the streets in central London will be met with a heavy police presence. One that could well drain police resources away from other areas of the capital and from surrounding counties.

Let’s play a game of imagining what could happen with a mass of cops in central London and the rest of the capital somewhat short of cops on the streets. What if there were enough motivated class struggle activists across the capital who could see the opportunity provided by the distraction of the protests against Trump, and the cops diverted to police them, to use the 13-14th July to undertake actions that will aid our class? It’s not hard to draw up a list of issues that could be highlighted by a series of nimble, well planned, creative actions if you want a bit of a thought experiment.

Purely as an exercise, these are these are the ones we’ve thought of. Abandoned council estates awaiting the right offer from a developer that could be re-occupied. High end estate agents complicit in the agenda of making London a welcome home for the super rich while ordinary people are socially cleansed from the capital – could it be that they may experience some creative ‘inconvenience’? Housing associations actively complicit in socially cleansing people from London being paid a visit by people who refuse to be moved away from friends, family and support networks? Exploitative outsourcing companies who treat their precarious workforce like dirt perhaps being given a lesson in manners? The list could go on if you really want it to…

The point we’re trying to make, without getting done for incitement, is that a) in situations like this, the left and a fair number of anarchists could do with being a lot less predictable and knee jerk reflexive and b) we need actions that advance our class interests rather than those that make the participants feel good about themselves but have no impact on the real world.

Just imagine what could happen when Trump visits the UK
at May 21, 2018 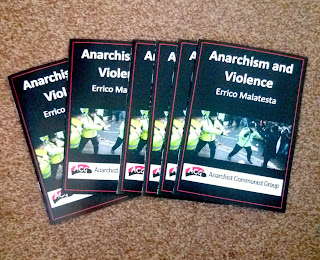